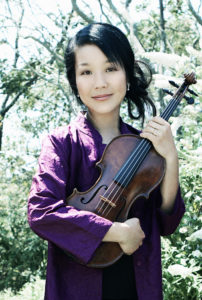 Violinist Mari Sato has enjoyed a rich and varied career as a chamber musician based in Cleveland. For twenty-four years, she was the second violinist of the award-winning Cavani String Quartet. During her tenure with the Cavani Quartet, Mari gave concerts on major series, including Carnegie Hall, tCorcoran Gallery of Art, Festival de L’Epau in France, and the Honolulu Chamber Music Society. She appeared in features on the public radio programs Performance Today and St. Paul Sunday and television programs on NBC, CBS, ABC, and PBS.

Formerly on faculty at the Cleveland Institute of Music 1995-2018, Mari Sato and her colleagues coached many outstanding young musicians in the Intensive Quartet Seminar, the Apprentice Quartet Seminar, and the Art of Engagement Seminar. Former chamber music students include members of the Jupiter, Daedalus, Aeolus, Miró, Fry Street and Afiara Quartets, as well as members of the Cleveland, St. Paul, Minnesota, Chicago, Detroit, and New York Philharmonic Orchestras. Since 2018, Ms. Sato has had the pleasure of working with the outstanding students at the Oberlin Conservatory.